After enjoying the sea view and appreciating these rock formations, you will continue in a south easterly direction, with a high solid, stone wall on your left.

To the right the cliffs are quite close, and you should be careful especially if the ground is wet or there are strong winds, which can make walking particularly challenging.

After you pass the edge of Rhoscolyn Head the coastal path gets very narrow at one point, where care needs to be exercised.

You must get through another gate before making for the high ground ahead, where you will see the appropriately sited coastguard lookout. 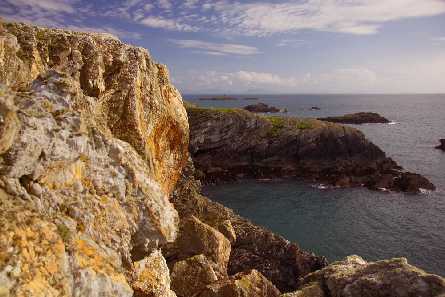 Before you reach the old lookout within about 80 to 120 metres of the gate is St Gwenfaen’s Well.

This site was used by pilgrims during the Middle Ages who believed in the water’s healing powers, and there are stone steps and seats around the Well.

Above here the old coastguard hut is now disused but do go and stand in front of the building.

On fine summer evenings you may see the Wicklow Mountains in Ireland from here.

Leaving this high ground follow the well defined paths down the grassy slopes which leads to a kissing gate, after which you progress along a walled track coming out behind gardens of some private houses. 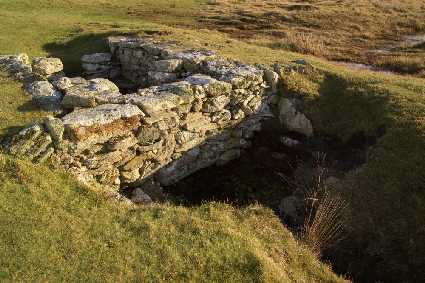 Photos provided courtesy of Paul Mattock, PM Photography Don’t worry, just follow the well marked path and this will lead you down the hill past an old lifeboat house, now converted into a house, and onto Borthwen beach.

You may have some difficulty reaching the car park and toilets which are just behind the beach if the tide is very high. 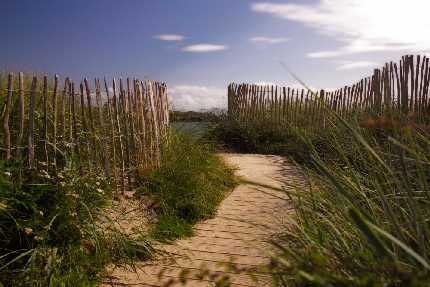 If you want a break from the Trearddur Rhoscolyn coast path, just walk up the winding lane and you will come to the White Eagle pub, where they a fine menu and on a warm, sunny day you can sit outside on the verandah which has great coastal views to the south and east.

Back on the beach at Borthwen, go along the beach and up a concrete ramp where you pick up the footpath inland among the marram grass. 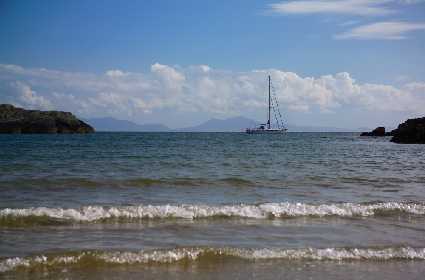 Now as you make progress along the coastal footpath you will have to go over three mini bridges, then cross fields full of wild gorse, after which you join up a path taking you to Silver Bay.

On the beach at Silver Bay continue along until you find a series of wooden steps which lead to extensive woodlands, and you follow the well defined path passing through another farm kissing gate and pass ruined farm outbuildings on your right.

You are now going north-north westerly and away from your original Trearddur Rhoscolyn coast walk, crossing a cattle grid and making your way on the road or alternatively an off-road option available only in spring and summer months.

Now walk along the main Rhoscolyn Four Mile Bridge road and after about half a kilometre turn right to reach Rhyd-y-Bont farm which is well signposted.

You will pass various outbuildings and then the path meanders its way until you arrive in the village of Four Mile Bridge.

This last section of a woodlands, meadows and hedgerows cornucopia around the central part of Rhoscolyn is in sharp contrast to the exposed, wild, rugged cliffs of the Trearddur Rhoscolyn coast. Now you have completed the second leg of the Anglesey Coastal Path, and in total a distance of 33 kilometres from Holyhead.