But now with purpose you progress to the south and the open sea.

As you approach the extreme north east boundary of the runways at RAF Valley airfield and Anglesey Airport the path swings sharply to the right in a south westerly direction and straight for Cymyran.

When you get to beach car park, go a little further beyond this point to reach Cymyran beach and depending on the state of the tides, you may see just how strong the currents can be in this area.

The tide can be so strong that some people jump into the sea with life jacket and swim with the help of the strong current back down towards Rhosneigr. 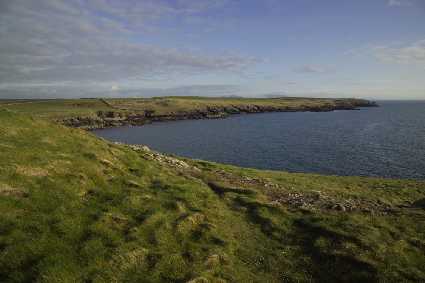 Sure is exhilarating but perhaps it is best not to be tried by people not familiar with the local sea conditions.

After turning left at the end of the sandy estuary you will see the wide expanse of the sea with Rhosneigr beach to the left.

This bay is often a frenzy of foam as wind surfers, kite surfers, dinghies and jet skis compete for the space as waves crash in from the Irish Sea. 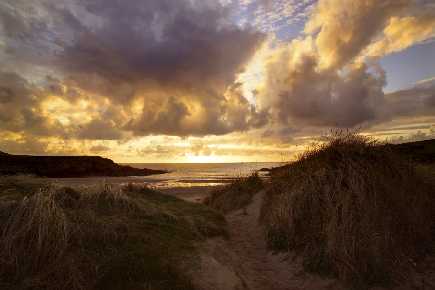 And there is thick, long marram grass and dune coverage on your left as you make for Rhosneigr across a beautiful long sandy beach.

You can generally wade across the River Crigyll to reach Rhosneigr beach where all the dinghies and water craft are kept.

If, however, the tide makes this difficult, just turn inland into the sand dunes and make for a small footbridge past the RAF Valley perimeter.

Making your way out of Rhosneigr and past the character waterfront cottages with panoramic sea views, you walk across a very long sandy beach as you continue your Cymyran Aberffraw trek. 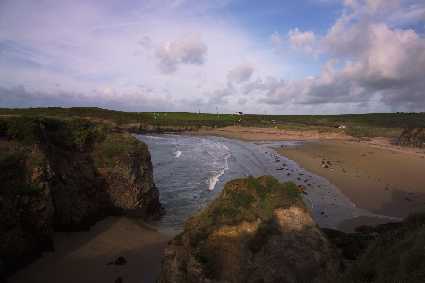 Photos kindly provided by Paul Mattock, PM Photography Then after about 750 metres you climb a small slope over some rock outcrops with well positioned beach cottages just behind, and where the beach becomes pebblier around Cerrig y Defaid and Porth Nobla.

Here you will see the natural harmony of the waves before they break up on the beach before you. A good reason to note Cymyran Aberffraw as a must-do section of the coastal path.

If you sit at one point on this beach with the rocks rising to almost but not completely obscure the oncoming waves.

You may experience an amazing phenomenon, where you feel as if the waves will continue past and over where you are sitting.

This alone is worth the effort to get here.

Now you leave the beaches and make your way up to an exposed grassy headland where you pass the famous ancient, prehistoric burial chamber, Barclodiad y Gawres, from the Neolithic Period.

From this grassy mound you come down into Cable Bay (Porth Trecastell) where you can cross the beach and then rejoin the Cymyran Aberffraw path as it continues to trace along the coastline.

There is then a diversion inland where you have to turn left and go through a gate and then follow a boundary wall which separates you from the Anglesey Circuit racing track on your right, the seaward side.

The natural sounds of the sea and crashing waves are now replaced by the mechanical revving sounds of racing bikes and cars.

Continue along the coastal path and you eventually reach a very quiet secluded cove called Porth Cwyfan, and just around the low tide mark is a remarkable structure.

Here is Llangwyfan, the old Church of Cwyfan, built on a walled island. Each year a special service is held on the church as the devoted followers make a very special pilgrimage to the island.

Finally, as you continue along the beach you negotiate a few undulating sections of rocky coves and outcrops before reaching the second estuary of the Cymyran to Aberffraw section of the Anglesey Coastal Path.

Take the path in a north-north easterly direction as you make your way up the River Ffraw towards the famous village of Aberffraw.