Every thirty seconds the bell rings out just to remind us of the stolid duty it performs around these treacherous tidal waters near Puffin island.

With the erratic sounds of gulls and the odd motor boat in the distance we have a unique Penmon Point Sea Symphony!

You can get to this magnificent coastal spot by taking the road from Beaumaris through Llangoed and heading for Penmon.

See a map of the island here.

When you get to Penmon, head for the Priory where there is a small toll gate to drive the last mile or so.

There is parking at Penmon Point, next to some old pilot houses. As with other areas of the island I recommend you get a good OS map which will make your experience more interesting and enjoyable.

Nearby is an old lifeboat station, built in 1832. This lifeboat was responsible for saving 116 lives from 50 rescue attempts. Sadly, in 1915 it closed. 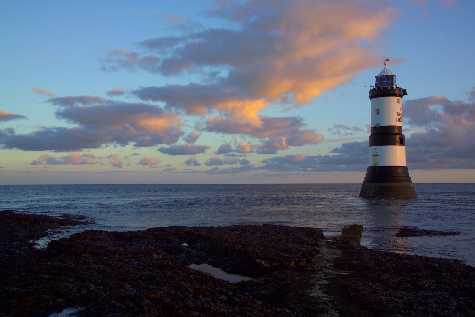 This corner of of the island played its role in the early semaphore communication used by Liverpool shipowners during the 18th and 19th century.

On the north east tip of nearby Puffin Island a semaphore station was established.

This linked with Point Lynas to the north west and Pen Gogarth on the Great Ormes Head near Llandudno, to the east.

As you explore our island coastline you will hear of numerous shipwrecks over the years.

One such incident involved the old steamer, the Rothsay Castle, on its regular passage between Liverpool and the Menai Straits.

It says something about the advance of technology when a steamer can be described as "old" in 1831.

This ship left Liverpool with 150 passengers aboard and soon ran into very difficult sea conditions beyond the Mersey Bar.

So fierce was the headwind that the ferry had not even reached the halfway point of her journey after 4 hours. According to passenger accounts, the Captain refused their request to turn back to Liverpool.

The Rothsay Castle had left the Mersey at 11 a.m and it was now midnight, yet still she had not reached her destination.

At about 1 a.m she struck the Dutchman Bank, bounced off and continued without much control along the channel.

A further series of collisions with the sand banks finally resulted in her nemesis.

She began to break up in the appalling sea conditions. Survivors recount how there was total chaos on deck. The funnel broke off and pushed the Captain and his officer overboard.

In all the mayhem that ensued no fewer than 130 people lost their lives.

There were only 20 survivors who were rescued by the Beaumaris Lifeboat, supported by a pilot boat from Penmon.

Survivors claim the Captain had stubbornly refused to even consider the extreme sea conditions. This incident took place on 17 August 1831.

Might this have happened had there been a lighthouse at Trwyn Du at the time? And did this incident contribute to the decision to build the lighthouse six years later (1837)?

Read about other lighthouses around the island coast:
South Stack
Point Lynas
Skerries